Scream is the "requel" that will slay audiences

The films that made us scream or laugh during our teen years are often the ones we re-watch or talk about for decades to come. Growing on films like Halloween & Nightmare on Elm Street, the Scream franchise holds a similar place in my heart.

After the initial success of 1996's Scream. the franchise turned into sequels, spinoffs and an MTV TV series and now we're seeing key characters return in 2022's Scream twenty-five years after we first saw Drew Barrymore pick up the phone for iconic opening scene of the original film. 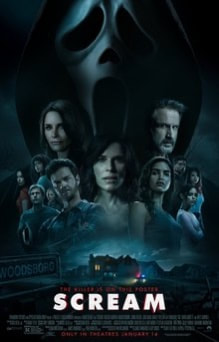 ​No spoilers here. From the trailer & television interviews, we've seen that legacy characters Sidney Prescott, Gail Weather and Officer Dewey return, along with the trio who originally played them. Seeing Neve Campbell, Courtney Cox & David Arquette return to their original roles brought back all the excitement of seeing the first Scream movie in theaters.

This time around, Ghostface is back for a new crop of Woodsboro residents including Dylan Minnette, Jenny Ortega, Jack Quaid and Melissa Barrera and their group of friends. We get throwbacks and Easter eggs to the original film and series, and die-hard fans will be happy with this latest film that injects new life to Scream.
​
Hopefully younger fans will watch this and want to go back and re-watch the original film to see the masterpiece that made that made fans collectively say 'Yes' when Ghostface asks 'Do You like Scary Movies?'
​Scream
is now playing nationwide