La Cage Aux Folles has become a crown jewel of the American musical theater.  Based on the 1973 French farce of the same name, this toe-tapping musical became the toast of Broadway during the 1983-1984 theatre season.  With a rousing score by Jerry Herman, a whip-smart book by Harvey Fierstein, and original direction by Arthur Laurents, this drag-based musical broke Broadway records and allowed a dynamic same sex couple to take center stage during a time when a vast majority of the American populous was resistant to this reality.

This oft-revived classic has been a mainstay of regional theater for years and has had two successful Broadway revivals in the last two decades.  This might cause one to consider if the world needs another version of this musical.  The answer is an overwhelming yes when you consider one major factor: Ginger Minj, a drag superstar made famous from RuPaul’s Drag Race.

Minj’s comedic timing and full commitment to the extreme highs and lows of Albin make this trip to Skokie a must-see event for all musical-loving Chicagoans.  Rarely do we see a performer so comfortable with “putting a little more mascara on'' while belting this challenging score. 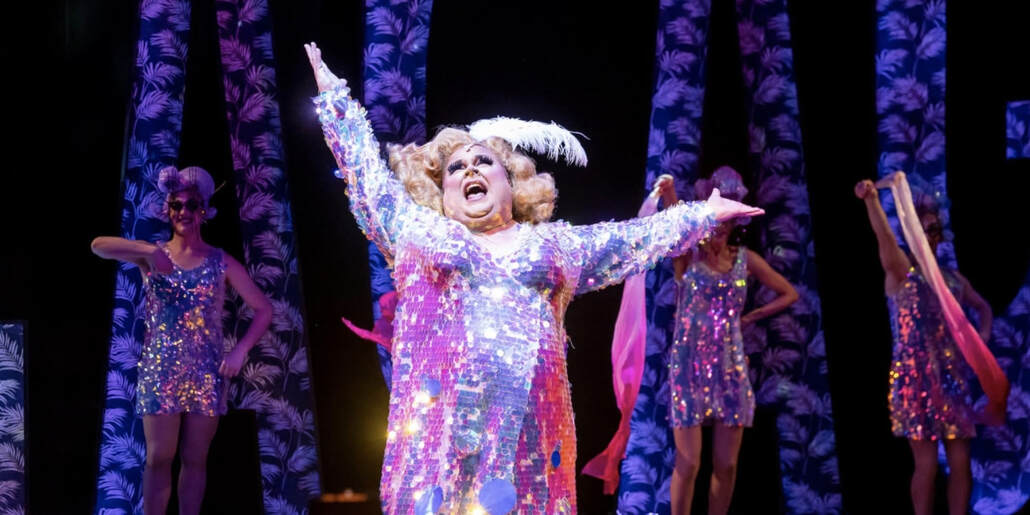 The once-scandalous storyline has now become a well-worn tale for many audience members.  Georges, the owner of a St. Tropez drag club, and his love Albin (who appears nightly as Zaza) have a highly dramatic life of glamor and comfortable ease.  When their son, Jean-Michel, arrives home to announce his engagement to Anne (the daughter of a conservative political official set on closing drag clubs), Albin and Georges’ world is turned upside down in a ruse to fool the deeply conservative parents.  The success of Mike Nichols’ film The Birdcage (plus the musical The Addams Family, who clearly lifted their plot device from La Cage) will make this story predictable and rote for many audience members.   It requires a gifted and nuanced cast to allow the audience to re-explore a tired storyline.  I am pleased to say that this cast is up for the challenge and often finds dynamic new levels and honest moments to help keep the audience present in the story.

Jason Richard’s Georges is humble, sarcastic and provides the appropriate comic foil to the dramatic hijinx of Albin.  Equally effective performances come from Christopher Ratliff’s Jean-Michel and Honey West’s Jacqueline.  However, as alluded above, this show belongs to one performer: Ginger Minj.  Albin is a complex character who can often feel inauthentic or unrealistic because of their bigger than life onstage and offstage personas.  Minj is aware of this challenge and takes advantage of the quiet moments to support why Georges adores every bit of her enormous personality.  It is evident that this couple loves each other - a key factor in making the harmful decisions that Jean-Michel and Georges unload on Albin not feel enormously mean-spirited in 2022.  Minj’s “I Am What I Am” starts in a simple whisper without underscore and builds to a moment of defiance that feels deeply personal and truthful.  These quiet moments provide the perfect example of range that Ms. Minj brings this text.  She knows this character and lives comfortably in both Albin’s loafers and Zaza’s heels. 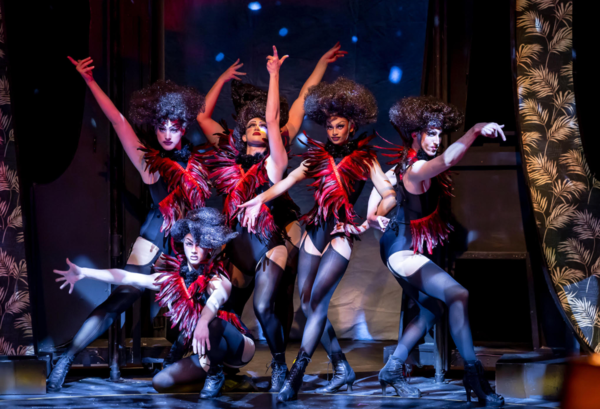 The Northlight Theatre space provides this production with an intimacy that often is missed in larger auditoriums.  The ensemble supports the plot with vivacity and care.  Act two leans a bit too heavily on the farcical moments of the conservative parents' visit and some moments of dialogue become a bit heavy-handed.  Even in its slowest moments, the show still sparkles with the glittering score and inspired choreography.

If I were a regional theatre producer, I would take Music Theater Works’ inspiration and revive this production for Ms. Minj across the United States.  RuPaul’s Drag Race has convinced many fans of the “charisma, uniqueness, nerve and talent" needed to be a modern drag performer.  Ms. Minj’s performance in this production proves that she is also a musical theater star.  She is the perfect ambassador to move La Cage Aux Folles into the next generation of musical theater lovers.  Any performer who takes on this role locally in the future will have some big shoes - or, rather, heels - to fill.