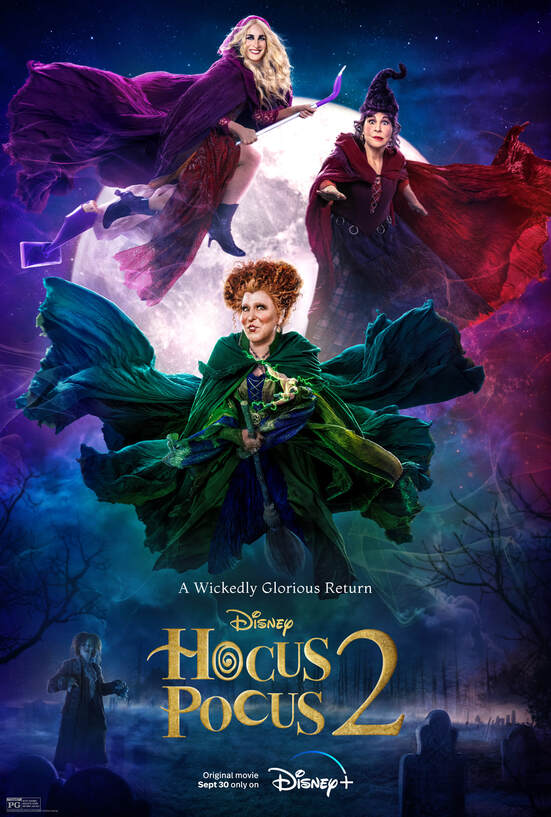 ​​​Fans have been waiting almost 30 years for a sequel to Hocus Pocus and now the moment is finally here. The original film was released in the summer of 1993 (yes, during summertime) and wasn't a box office success. Yet, just like A Christmas Story and  Willy Wonka and the Chocolate Factory, the film found cult classic status after appearing on television marathons year after year. Now, the Sanderson Sisters' costumes and phrases are part of pop culture and are here to stay!

When it comes to the Sanderson Sisters, Bette Midler, Kathy Najimy and Sarah Jessica Parker bring the same energy and delight to these roles, as if three decades have not passed. Fans are going to love their energy, their lines and references to the original film.

I'm not giving any spoilers, but make sure to look for plenty of Easter eggs in this film. The sequel's nods include past locations, characters and even Jenny Dennison's Madonna Halloween costume. When I first heard that Thora Birch and Omri Katz wouldn't be reprising their roles as Dani and Max, initially I was bummed. At the same time, I was excited to see what Sam Richardson, Tony Hale & Ginger Minj would bring to this film. Let's just say the film exceeded my expectations as to how to move this story forward,while celebrating the original.

This is a rare sequel that knows what the fans want, including a few moments to the LGBTQ+ fans, while also inviting a new generation of fans for the magic that has become Hocus Pocus.
Hocus Pocus 2
playing exclusively on Disney +
beginning September 30