Dua Lipa brought her Future Nostalgia tour to the United Center on Wednesday, March 9 for an unforgettable night of glittery neon magic! Throughout the 90 minute concert, we got to witness her iconic dance moves and outfit changes, but also celebrate Dua’s cherished history with Chicago. During the show, she recalled one of her first major state side gigs opening for The 1975 at House of Blues during Lollapalooza weekend. Dua also performed at Lollapalooza that year and again in 2018.

While stadium-sized concerts took a pause during the pandemic, that time only fueled the meteoric rise of Dua's popularity to make way for this moment. She was crowned with the #1 song of 2021 with Levitating, although the tune never made it to #1 officially, it did spend a record breaking 41 weeks in the top 10 for a female solo artist. That highly-anticipated tune was one of the many highlights of the show, and saved as the last song before the encore. 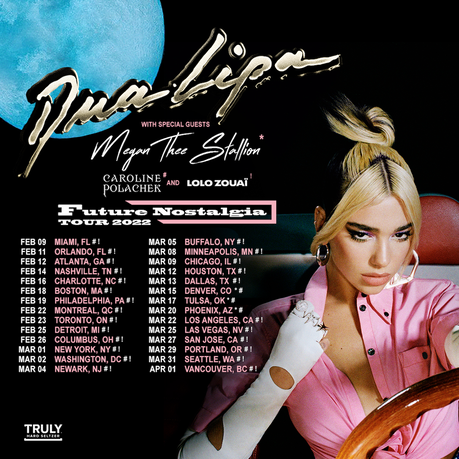 ​Back to the show! The performance was packed with hit after hit after hit. Dua Lipa kicked off the concert with Physical a tune that many of her fans embraced given all the retro-inspired Let's Get Physical tank tops and t-shirts that were spotted in the crowd. Next up, her breakthrough single New Rules and the Whitetown Your Woman sampled-single Love Again.  After playing recent and past hits, she hit a section featuring her duets including One Kiss with Calvin Harris. the Grammy-award winning tune Electricity with Silk City & Cold Heart with Elton John.

The encore of Future Nostalgia & her radio hit Don't Stop Now  gave her fans everything they wanted to cap off the evening. Thank you Dua Lipa for a fantastic evening for those of us who embraced your music during the pandemic, but we finally got to gather as fans and celebrate our Future Nostalgia together, a long-awaited moment for her fans that was pure pop perfection. ​
​