FILM REVIEW
I Want You Back
Rudy Segovia
Headliner Chicago 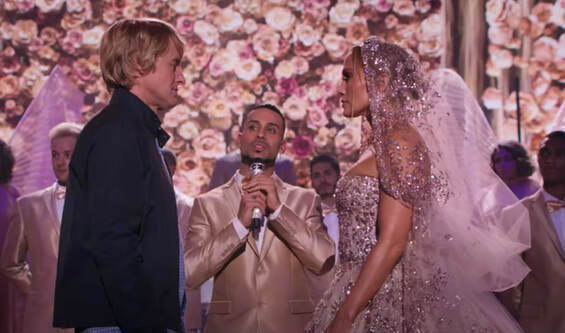 ​​20 years ago, Jennifer Lopez told us to not be 'fooled by the rocks that she's got; because she's still 'Jenny from the Block.' Now we get to see a scenario of this song come to the big screen. In Marry Me, Jennifer Lopez plays Kat Valdez, an international pop star, with an equally famous partner in Bastian played by Maluma. After he was caught cheating on her, she decides to marry a stranger on her wedding day, which was to be played out as their concert. Owen Wilson, plays the math teacher who got roped into going to the concert and by being at the right place at the right time, ends up being chosen by Jennifer Lopez to marry.

While many fans may wonder what it's like to be married to a pop star, this gives us insight on what it's probably like inside the real life of Jennifer Lopez, between meetings, appearances and creating social media content. Does the average partner embrace the lavish lifestyle or can a popstar be turned around to enjoy life with the average 9-5 lifestyle is the main question in the film. While much of JLo's media coverage centers around her love life, this film probably hits closest to home on what it's like to be in a relationship with the international pop star,

Nice shoutout to Illinois in the movie, as Jennifer Lopez travels to Peoria, Illinois in one scene. No spoilers about the scene, but it's pretty fun and one of the best in the film. For Jennifer Lopez fans, it'll be fun to watch her perform new material, dance routines, and see her in a project that probably closely resembles her life.