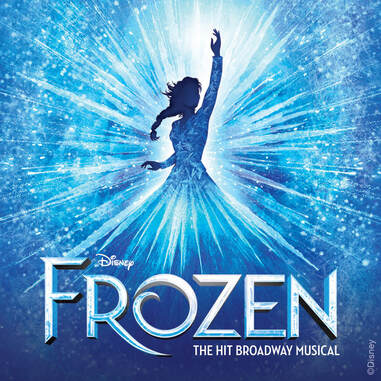 ​For many parents, 2013 marks a major landmark in Disney’s magic.  This was the year that the world was introduced to Elsa and Anna, two strong sisters who discovered that their love for each other is more powerful than any romantic love.  This film ignited the box office and inspired countless blue flowy gowns and backseat karaoke beltings of "Let It Go."  Throw in a loveable snowman, two potential love interests, and oddly-adorable rock trolls, and you have an instant Disney classic.  You also have the making of a magical screen-to-stage adaptation that will continue to delight theatre audiences young and old for many years to come.

The authors and composers of this musical adaptation stray only minimally from the plot and structure of the original film.  This choice is smart, as many of the audience members are quite fluent in the dialogue and lyrics of this story.  The scenic, lighting and costume designers skillfully weave the magic of the film into practical three-dimensional choices that inspire several moments of ahhs or applause from slack-jawed audience members.  What is puzzling however, is the addition of several ballads to the already robust score.  While no song is a clunker, the increase of slow, reflective songs causes the pace of the piece to lag and often allows the younger audience members a chance to drop out of the magic.  The original film has a joyful, robust meter that maximizes interest through many bouncy tunes.  I wish the adaptors had resisted the urge of adding an extra 30 minutes of music that doesn’t increase the plot or emotional struggle of the characters.

Speaking of actors, this tour features a swath of talent who have found truth in their characters and embrace the magic of the story.  Caroline Innerbicher’s Anna is particularly impressive, as she finds the awkward pluckiness, while staying true to the untarnished heart of the character.  Caroline Bowan’s Elsa is equally impressive, even if her character often is forced to brood humorlessly.  These two performers have clearly found the sister-like bond that audiences expect and need in this female-driven story.

The non-human characters also bring needed energy and joy to the story.  The actor-manipulated puppets of Sven and Olaf add comedic heart and harken the brilliant blueprint Disney forged with The Lion King.

While Frozen may not be groundbreaking theatre, it is the perfect family treat for this holiday season.  Young audience members (and those who are young at heart) will instantly fall for the story, the spectacle, and the heart of this new Disney classic.

Additionally, this reviewer salutes Disney’s commitment to casting Kristoff as a character of color.  My hope is that the casting director will begin to consider actors of color for Elsa and Anna, as well.  Every aspiring Disney princess deserves to see an actor who looks like them!
3 stars (out of four)
​
Disney's Frozen
Now Playing until January 22, 2022