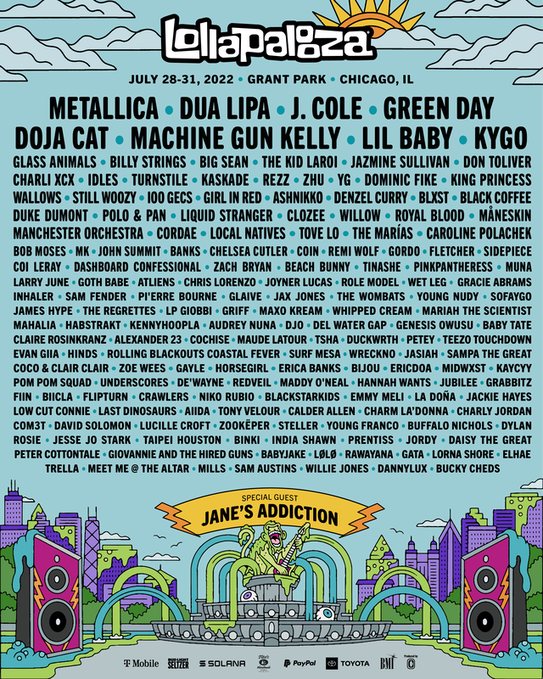 It's time for the ultimate concert experience in Chicago! Lollapalooza returns for the 4 day music festival at Grant Park from July 28-July 31st. With over 170+ artists scheduled to perform, here are some of the highlights to check out. Artists listed below in no particular order.

1. Wallows (Saturday 5pm)
Some may think of 13 Reasons Why when it comes to Dylan Minnette, but the tracks from Wallows have been some of my favorites of the past few years. Stand out tracks Are you Bored Yet, Marvelous, Scrawny & Remember When.

2. Dua Lipa (Friday 8:45pm)
During the time of the pandemic, Dua Lipa's popularity rose to astronomical levels with bangers like Levitating, One Kiss, Love Again and Break My Heart. Last time she was at Lollapalooza was in 2018 for a 4pm slot and great to see her headline the fest this time. Plus, if Elton John is in Chicago checking in on his musical The Devil Wears Prada, there is a slight chance we could see him surprise audiences with a performance of Cold Heart.

3. J-Hope (Sunday 9pm)
As a late addition to the fest and part of one of the biggest acts in the world, J-Hope is a stand out performer at Lollapalooza this year. The artist just released his first solo album outside of BTS and will be the first South Korean artist to headline a major US festival. This is going to be a set to witness and will be talked about for years to come.

4. Green Day (Sunday 8:15pm)
They've remained relevant and one of the biggest alternative bands on the globe since the 1990's. Expect a setlist of greatest hits and sing-a-long favorites like Basketcase, When I Come Around, American Idiot and Good Riddance (Time of Your Life) to be belted by the band and audiences alike to cap off Lollapalooza weekend.

5. Kygo (Saturday 8:30pm)
As one of the biggest DJ's in the world, this one is a must-see for fans who came to Lollapalooza to dance. His latest remix of Whitney Houston's cover of Higher Love became a staple in clubs as well as pop and adult-contemporary radio stations across the world. Kygo's given that same retro remix treatment to Donna Summer's Hot Stuff and Tina Turner's What's Love Got to Do With It bringing classic hits to the future.

6. Glass Animals (Friday 6:45pm)
With one of the biggest radio hits in recent history, Heat Waves became a signature tune for the band and a huge crossover hit for radio formats. With record temps this summer, expect Heat Waves to resonate with fans in more than just one way. With the a pocket full of catchy tunes, expect this band to one day headline Lollapalooza in the near future.

7. Charlie XCX (Sunday 5:15)
Want to dance your cares away, then Charlie XCX is the performer you're pumped to see on Sunday. Between her breakout hit I Love It with Icona Pop to Boom Clap, Vroom Vroom and 1999, Charlie XCX will be bringing the party to the closing day of Lollapalooza.

8. Big Sean (Saturday 7pm)
With a one hour time slot, expect Big Sean to bring out hit after hit of club and radio favorites  Big Sean has also teamed up with Kanye West on several tracks and we could get a surprise appearance by Ye. No way of knowing until it happens, but that could be possible

9. Maneskin (Sunday 4:15pm)
With their cover of Frankie Valli & The Four Seasons hit Beggin a radio crossover hit, and their recent appearance on Saturday Night Live, expect this band to be one of the biggest afternoon draws on Sunday.

10. Tove Lo (Thursday 5pm)
We recently learned on RuPaul's Drag Race Allstars, the correct pronunciation of Tove Lo's name. Too-Vay Lu is how we all learned to correctly say it, versus the Tove Lo we've become accustomed to saying. As a favorite of Lollapalooza in past years, it's always fun to welcome her back to Chicago.