The history between The Metro and The Smashing Pumpkins is a rich one, marking pivotal moments in the band's career for 34 years. The first time that Smashing Pumpkins performed at The Metro was in October of 1988 and the last time was over a decade ago in June of 2012.

In case you missed this rare opportunity to see them at The Metro, The Smashing Pumpkins will be back on tour this fall and play at the United Center with Jane's Addiction on November 5th. ​ 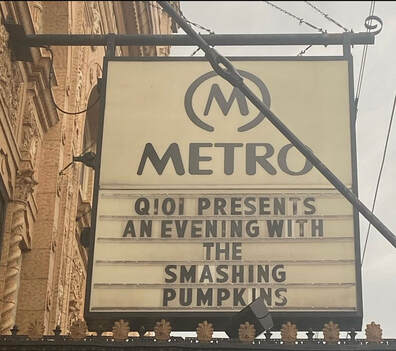 ​Back to last night's show, the 23 track performance featured a wide range of hits, rarities, new songs and covers. Empires and Beguiled are the two new tracks played from the upcoming Atum. The band also brought out rare tracks, including Ugly, a B-side to 1979, early in their set. Fans were also treated to a reworked cover of Once in a Lifetime from Talking Heads.

Fan favorites in the set included Today, Bullet with Butterfly Wings, 1979, Ava Adore & Tonight, Tonight, creating sing-a-long moments for the die-hard Pumpkins fans in the audience, especially hearing this arena-sized anthems in such an intimate space.

With each new album and turning point in Billy Corgan's career, he's made a stop at The Metro and will continue to mark important occasions here​.
Fun fact: Billy Corgan filmed a music video for Lyric with Zwan at the Metro and I was an extra. You can see me at 1:47
Atum is a 33 song anthology with 11 songs out every 11 weeks beginning on November 15th. Also check out Billy's new podcast Thirty Three with William Patrick Corgan is out now and the first episodes can be found at SmashingPumpkins.com